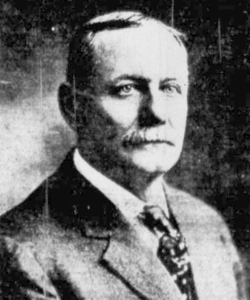 SAUL, James. (Dubuque, IA, Dec. 28, 1899--Dubuque, IA, Jan. 6, 1984). MAYOR. Saul served six years on the Dubuque City Council as alderman of the First Ward. The owner of SAUL BROS., he was elected mayor on April 7, 1914 with the full support of the Telegraph Herald. An article recounted a time when, as an alderman, he wore work clothes to inspect, by crawling through, several hundred feet of new sewer line. (1) Criticism at the time focused on the DUBUQUE POLICE DEPARTMENT, and one of Saul's first actions as mayor was the appointment of John W. Giellis as the new chief. The department was soon reorganized. In November, 1914 he appointed a committee of the council to approach the owners of LINCOLN PARK and the old baseball field about purchasing the land by the city for parks. (2)

In 1918 Mayor Saul dealt with the worst outbreak of POLIO in the city's history. During July, seventy-one children were stricken with the disease and nine died from it. At Saul's request, the State Board of Health in Des Moines dispatched noted Mayo Clinic physician Dr. E. C. Rosenow to Dubuque to assist local efforts. All playgrounds, theaters and Sunday schools were closed. By August 3, ten days had passed without a new case being discovered, and the fear gradually passed.

During his years as mayor, the issue of a memorial for William Boyd ALLISON and David B. HENDERSON played an important role in politics. Concern about the costs to the city of improving a site along the MISSISSIPPI RIVER for ALLISON-HENDERSON PARK led Saul to twice veto the issue brought to the city council. One of these instances involved a deed to "Sawdust Park." (3) During his last term of office, Dubuque adopted the city manager form of government.

Even out of office, Saul continued to enjoy considerable political influence. In 1930 he was convinced to campaign for county supervisor. In November he won election on the Democratic ticket to a three-year term. Saul took office on January 2, 1931, and was later elected chairman of the board.

Involved in the contracting trade for forty-five years, Saul was associated with John Byrne in the firm of Byrne and Saul. Later Byrne retired and Saul's son entered the firm that was renamed Saul and Son. A successful businessman, Saul also enjoyed a reputation as one of Dubuque's many charitable citizens. He was once known to have taken his own Christmas tree to the home of a family less fortunate.