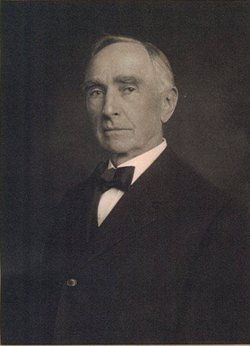 RIDER, John Vincent. (Pratz, Grand Duchy of Luxembourg, Apr. 5, 1836--Hollywood, CA, Aug. 1931). Rider arrived with his father and family in 1846. After visiting friends in Chicago they arrived by covered wagon in Dubuque on August 24, 1846. Writing in 1925 in his autobiography, Memories of a Long Life, Rider told of his friendship with Bishop Mathias LORAS. The following year the family moved to Mosalem Township and eighty acres of land for which the family paid one hundred dollars. Rider spent three years on the farm before receiving his father's permission to move to Dubuque and embark upon a business career. (1)

Rider worked three years on the farm. The first year was spent helping his father cut wood while the last two he attended school. On March 20, 1850 with his father's permission he traveled to Dubuque to begin a career in business. it was agreed that he would work three years at a store operated by Johnson and Bunting. Two years work paid for his board and clothing. The third year earnings paid for his board and a wage of one hundred dollars. (2)

With his father's death in March, 1852, Rider was left with the responsibility of his mother and his five siblings. Matters became worse in May when Johnson and Bunting went bankrupt. Rider immediately began work for FARLEY & CUMINGS. His earnings paid for his board, clothing and an annual wage of one hundred dollars. Rider's hard work resulted in his take-home pay being increased to three hundred dollars at the end of the first year. (3)

Farley and Cumings failed during the financial panic of 1857, and after a brief period of unemployment Rider went to work as secretary for the DUBUQUE HARBOR IMPROVEMENT COMPANY for fifty dollars per month. (4) In 1860 Rider accepted the position of deputy sheriff when his former employer C. J. Cumings won election as sheriff. Cumings' failure to win reelection again resulted in Rider being unemployed at the beginning of the summer of 1864. (4)

Rider worked briefly in the farm machinery business with Barney Gifford. In August 1864, however, he was informed by John BELL and James WALLIS that they had purchased the retail business of Wood, Luke and Company. Bell and Wallis asked Rider to become an equal partner in a business capitalized at $24,000. The company was first known as John Bell and Company. The name was changed in 1865 to Bell, Rider and Wallis. Bell's interest was purchased in 1866, and the company was renamed Rider, Wallis and Company. In 1889 the firm was incorporated as the RIDER-WALLIS DRY GOODS COMPANY.(5) 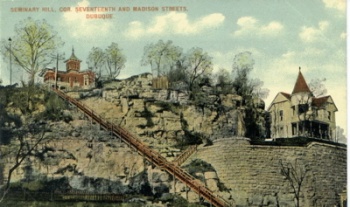 Rider's hilltop home (red) can be seen in this postcard of Seminary Hill.

Rider and his wife journeyed to California in 1913 on a trip and spent a year in a hotel in Los Angeles. (8) They then decided to make the West Coast their permanent home. He deeded his Dubuque residence on the Madison Street hill to the City of Dubuque to be used as a park. The Rider residence became Rider Park until, at his insistence, the name was changed to MADISON PARK. Several pieces of real estate were given to the MOUNT PLEASANT HOME. (9) 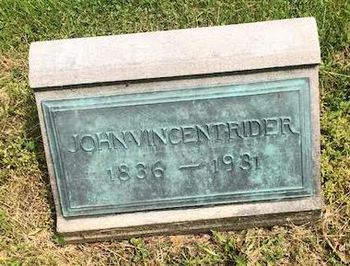