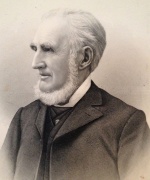 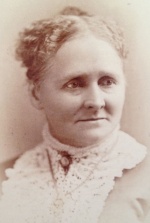 The voyage across the ocean took nine weeks. A nephew of John BELL was among the passengers. After a short visit with his brother Thomas, James visited the companion of his ocean voyage, who had settled near John Bell. There the young Englishman, James Wallis, met Ann Bell, the third child of John Bell. The visit of a week or two was followed by a second to see the girl that had captured his heart, even thought it meant a walk of thirty miles. (2)

So after a six week courtship with another thirty mile walk, James Wallis married Ann Bell (20 years old) February 18, 1843. A few weeks later the young couple left the Bell home at Sharon Center, Ohio, which had been established in 1833. With $30.00 they set out for Dubuque where two aunts and the oldest brother of the bride, John Bell, had settled. (3)

In 1843 James and Ann moved to Catfish (later called Rockdale), Iowa; then New Diggings, Wisconsin where the LEAD mines were flourishing. James worked the mines, Ann took in boarders - mostly miners. In 1844 Sarah Jane Wallis was born; the family moved to Whig, Wisconsin, northwest of Platteville. In 1845 John William Wallis was born. (4)

The family moved back to New Diggings in 1846. James built their first home: a frame building with a large living room and two bedrooms. While in New Diggings, Ann Bell Wallis's sister, Sarah Bell, came from England. She met and married George Raw. (5)

James and his family moved in 1850 to Durango, Dubuque County, Iowa. They left the following year for Mineral Point, Wisconsin, to run a lead smelter. He also sold exchange for James Carter and Company, bankers of Galena, Illinois. (6)

On October 10, 1851 James Wallis became a naturalized citizen of the United States in Dubuque, IA. The family moved in 1857 from Mineral Point back to Rockdale, to manage a flour mill. They moved into a stone house on a high shelf overlooking CATFISH CREEK. (7)

By 1862 the flour mill did a thriving business, but Ann's older brother, John Bell (in Dubuque) was looking for a partner, so the family moved to Dubuque. James Wallis put the $8000 he had saved in the wholesale dry-goods house of JOHN BELL AND COMPANY, wholesale dealers in dry goods and notions at 445 Main Street. (8)

In 1864 son John William Wallis ("Will") went to the CIVIL WAR. That troubled father and mother. Father said, 'When you are finished you are to come home. I have only two children and one at least must be at home' [sister Sarah Jane was teaching school]. (9)

James and Ann Bell Wallis purchased an acre of ground at the head of Arlington Street on July 8, 1880. This became their home at 632 Chestnut Street, in Dubuque. (11) These were the grandparents of James Wallis WINALL. (12)