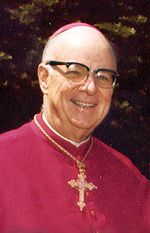 WATTERS, Loras J. (Dubuque, IA, October 14, 1915--Winona, MN, March, 30, 2009). Fourth auxiliary bishop of Dubuque. In 1966 Bishop Watters, superintendent of schools of the archdiocese, assisted in the reorganization of the Dubuque Catholic school system. He was considered instrumental in the establishment of the archdiocesan board of education, area school boards, and local parish school boards.

Educated at the ST. RAPHAEL'S CATHEDRAL school and LORAS ACADEMY, Watters graduated from LORAS COLLEGE in 1937. He took postgraduate work at the North American College in Rome, Italy, before his ordination by Archbishop Francis J. L. BECKMAN at Saint Raphael's Cathedral on June 7, 1941.

Watters served as head of the department of education at Loras College from 1954 to 1956. In 1956 he returned to Rome as spiritual director of the North American College. Watters was recalled to Iowa in 1960 to direct the North American Martyrs Retreat House in Cedar Falls. In 1965 he was consecrated auxiliary bishop in St. Raphael's Cathedral. In October 1986, Bishop Watters of the Diocese of Winona (Minnesota) resigned his post.