For many years this tourist information booth was located on Dodge Street at the foot of the Julien Dubuque Bridge. It was torn down with the expansion of Dodge Street in the early 1990s. Illustration by Norman Zepeski.

TOURISM. In 1966, Dubuque had the first and only tourist information center in Iowa according the chamber of commerce. (1) Local tourism, prior to the late 1980s, had been considered seasonal with many visitors coming to the area only to observe fall leaf color or ride the FOURTH STREET ELEVATOR.

The immense success of Robert KEHL and "Roberts River Rides" has been suggested as the beginning of the eastern Iowa tourist industry. "Roberts River Rides" was voted Iowa's Number One Tourist Attraction in 1984 by the Iowa Travel Council. In 1990 it was the first recipient of the Francis J. Barry Award for excellence in and dedication to the development of the passenger vessel industry.

Tourism was still a new idea, however, to the area. Visitors to the three colleges accounted for an estimated one-third of all the tourism dollars spent in Dubuque County in 1988. Additional attractions came first along the MISSISSIPPI RIVER. The ICE HARBOR was rejuvenated with the development of the NATIONAL RIVERS HALL OF FAME, FRED W. WOODWARD RIVERBOAT MUSEUM and the installation of the WILLIAM M. BLACK. Thousands who came to enjoy Riverfest and DUBUQUEFEST/VERY SPECIAL ARTS added the shops of Cathedral Square to their plans.

Other local attractions included the HERITAGE TRAIL, Victorian Progressive Dinner tours, programs and ice hockey at the FIVE FLAGS CIVIC CENTER, DUBUQUE GREYHOUND PARK AND CASINO, horse-drawn carriage rides, and sites used in the filming of MOTION PICTURES in and around the Dubuque area.

The Iowa Welcome Center, developed with the DUBUQUE COUNTY HISTORICAL SOCIETY, was expected to attract 200,000 visitors in 1991, its first year of operation.

Tourism boosted the lodging industry for the entire city. Bed and breakfast locations were developed including the Hancock House, 1105 Grove Terrace; Collier Mansion, 1072 West Third; L' Auberge Mandolin, 199 Loras; Richards House, 1492 Locust; and the Stout house, 1105 Locust. The REDSTONE (THE) continued to be a popular inn. 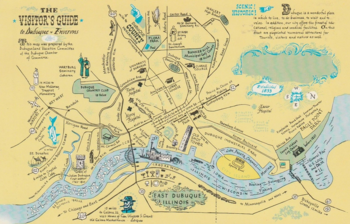 The dream of a new downtown hotel was achieved with the construction of a Clarion Inn. In February 1991, concern was already being voiced that there might not be sufficient lodging for the thousands of people expected to come to Dubuque during the first year of riverboat gambling aboard the 3,000 passenger DUBUQUE CASINO BELLE.

As a result of developing tourism, the number of jobs related to the tourist industry soared from an estimated 470 in 1984 to 2,400 in 1988. Between 1990 and the 1991 arrival of the Casino Belle, the number of employees hired by Robert Kehl climbed from one hundred fifty to five hundred twenty-five. Visitors to Dubuque over the same period increased five-fold to one million in 1988.

The 1990 season saw two hundred fifty thousand people cruise the Mississippi aboard Roberts' boats. These people consumed 120 thousand pounds of prime rib, 10 tons of chicken, 7 tons of raw cabbage, and five tons of fresh fruit and vegetables. These figures were expected to double with the first year's operation of the Casino Belle.

Charged with the responsibility for developing the industry further was the Dubuque Convention and Visitors Bureau, a division of the DUBUQUE AREA CHAMBER OF COMMERCE. The budget in 1991 for the Bureau was $320,000. Estimates were made that year of a $26.00 return for every dollar invested in promoting tourism in Iowa.