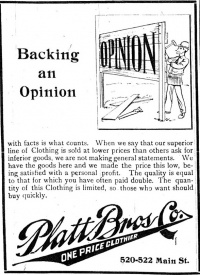 PLATT BROTHERS COMPANY. Phillip M. Platt came to Dubuque around 1866 and opened a clothing store. Its location is unknown, but around 1870 business had grown and more room was needed. The business, Platt, the People's Clothier, was relocated to Main and 4th Street. After he retired, the business became owned by his brothers, I. M. and S. M. Platt. In January 1880 it was announced that the company would again expand by leasing space in the GLOBE BUILDING. (1) Many of their clothing items were manufactured by Platt Brothers in New York City. (2)

The first introduction of electric power in Dubuque did not bring immediate or wide-spread acceptance. One exception was Platt Brothers which saw an opportunity. It welcomed some use of electricity and announced themselves as the "Renowned, Leading, Reliable and NOW Electric Clothiers." The company also advertised that with electric lights, customers could make their selections in the evening in safety. The Dubuque Herald stated that,