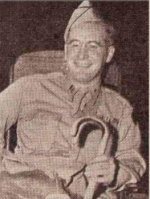 HOFFMANN, Albert J. Rev.(Dubuque, IA,--Dubuque, IA, Apr. 25, 1983). Chaplain. Known as "Father Duffy of World War II" and America's "most decorated chaplain," Hoffmann left Dubuque on February 25, 1941 with the local contingent of the National Guard. He served first as a chaplain in Ireland and England before leaving with them for North Africa and the Tunisia campaigns. He received the Silver Star in Tunisia for gallantry in rescuing a wounded German soldier at the risk of his own life. He received a Purple Heart for facial wounds received in Italy. He was awarded the Distinguished Service Cross for again rescuing a wounded German soldier.

Rev. Hoffmann set out with his team and managed to reach the soldier safely. He picked the soldier up, put him on his shoulder, and almost returned safely before stepping on a mine that blew his leg off. Hoffman lay in the minefield four hours before the medics could clear enough mines to get him out. He survived, and so did the soldier who was German. (1)

When he got back to London, Hoffmann got a prosthesis and immediately volunteered to serve as a chaplain on an amputation ward in an American military hospital in London. Among his many medals, Rev. Hoffmann received the Distinguished Service Cross, Silver Star and the Purple Heart. (2)

Prior to service in the war, Hoffman had been assistant pastor at SACRED HEART CHURCH. His return to Dubuque on July 6, 1944 was celebrated by thousands of well-wishers and a mayor's proclamation. After the war he returned to LORAS COLLEGE where he taught in the religious department from 1946 to 1964. From his retirement in 1977 until his death, Hoffman assisted religious services at ST. PATRICK'S CATHOLIC CHURCH in Dubuque. He served as the chaplain of Dubuque's American Legion Post 6. (3) In 1953 Rev. Hoffman was elected national chaplain of the American Legion for 1954-1955 at the organization's national convention in Washington, D.C. He was the second Dubuque resident to hold that office. The first was Rev. William J. MENSTER. (4)