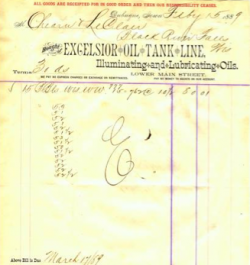 EXCELSIOR OIL TANK LINE. The announcement was made on July 12, 1888 that the Excelsior Oil Company of Cleveland had made arrangements to construct tanks in Dubuque. The news continued that the company had two or three refineries with the capacity of 5,000 barrels daily which made it a "formidable rival" of Standard Oil.

Property had been leased from Bart E. LINEHAN on lower Main Street and the storage tanks would be constructed by the IOWA IRON WORKS. The company was expected to hire about fifteen employees of whom four would be traveling salesmen. (1)

Advertising itself in 1889 as an "anti-monopoly oil company," Excelsior declared itself to be "the only house in Iowa independent of the Standard Oil Company."