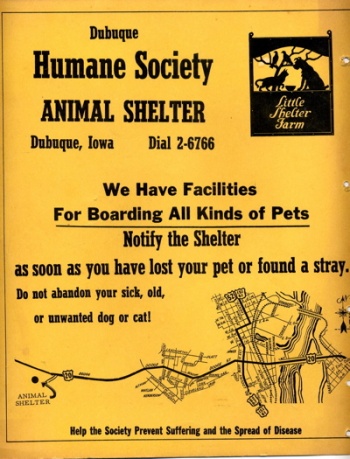 DUBUQUE REGIONAL HUMANE SOCIETY. In 1877, the American Humane Association was established. As the movement moved nationwide, an article in the Dubuque Daily Herald of February 24, 1882 stated,"Dubuque needs a society of this kind very badly…for the protection of the dumb brutes and the punishment of the human brutes!" There were no government agencies that protected child welfare; horses were forced to do the work of modern tractors, trucks and cars. There were laws against cruelty and abuse for decades, but they were not enforced. Most people felt that how a person handled their children and animals was their own personal business. Responding, however, to their interest in the care of animals, the creation of a Society for the Prevention of Cruelty to Animals was suggested in June, 1892. (1) The organization was formed in July 1892. (2)

The first effort at organizing a humane society must have proven short-lived. In February 1901, a group of volunteers wrote bylaws and formed a local humane society. The Dubuque Benevolent and Humane Society worked to protect the rights of children; animals, primarily horses, and companion animals like dogs or cats. (3) The first official meeting of the Dubuque Benevolent and Humane Society was held on April 11, 1901 at the SECOND NATIONAL BANK in downtown Dubuque. Money was raised through annual dues of $1 - $10, with a lifetime membership costing $25. (4) The organization began working out of the DUBUQUE COUNTY COURTHOUSE. (5)

Public education was a key element of the society's work. Newspaper articles described occasions when Society members rescued children from abuse. (6) Pamphlets and calendars were handed out reminding farmers and teamsters of their responsibilities to their animals. Copies of "Black Beauty", the novel dealing with animal abuse, were even distributed. In July 1904 as a reminder to care for animals during hot weather, straw hats with holes cut out for the animal's ears were distributed for a second year at many local stores. (7) The Society's efforts were rewarded. The number of fly-nets appearing on horses increased. (8) Gasoline engines gradually removed horses as important animals for farms and children's welfare became the concern of human services. Companion animals became the focus of the Humane Society.

The city provided the new society with some support. A member of the police force was designated to act as the humane officer to enforce anti-cruelty laws. Several years later, the society joined with the local board of education to pay for a combined truant and humane officer. In 1904, a humane officer was hired as the first full-time employee of the Society.

The humane officer became the alternative to the city dogcatcher, an employee of the city health department who looked for stray animals which ended up in the pound. The "pound" was a dark, basement coal room at DUBUQUE CITY HALL. Calls to the humane officer increased, leading to the establishment of a small animal shelter, one of the first of its kind in a city the size of Dubuque. In 1906 property at 2228 Jackson Street was rented. (9) As it developed, the safe-house for lost and stray animals included a home for the caretaker, an outside run for the dogs, an adoption program and kennels for temporary pet lodging.

In the mid-1930s, humane officer Charles Arendt retired and the Society moved to seven acres of land outside the city limits in Center Grove Township. (10) For a while, the shelter was operated out of a chicken coop. To cut costs, volunteers collected scraps from local restaurants and colleges to feed the animals. (11) The new location allowed for a pet cemetery to be added to the traditional services established at Jackson Street. By the 1950s, the Society developed the shelter into what was considered to be a state-of-the-art humane facility. 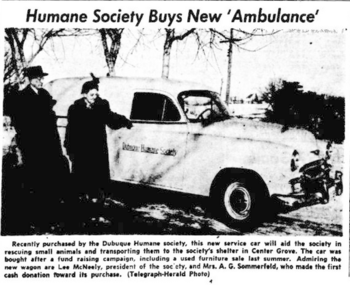 seemed to generate new concerns in addition to those normally addressed. In 1934, the local Humane Society joined others in speaking out about the transport of unweaned calves. Many of these animals arrived dead from starvation. Eliminating steel leg traps was a second major interest. (12) The Easter practice of some stores giving chicks to children was annually protested. (13) Winter brought calls from the Society for farmers to be sure to deal with animals under weather-related stress. (14)

Activity slowed in the latter part of the 1960s. Over the next twenty years, the board of directors went through two reorganizations. The first took place in 1969. The second, in 1988, revolutionized the shelter. (15) Volunteers Barb Ellsworth, John Pernanoud, Dale Repass and Dr. James Stark organized the recruitment of a wide variety of community members to form a new and more active board of directors.

Over the years, the Little Shelter Farm property, as it had become known, had severely deteriorated and needed immediate attention. The board determined that a coordinator was needed to oversee the shelter and its expansion. In 1991 Jane McCall was then hired as the first executive director. (16)

McCall immediately began developing ideas and long-range plans for the shelter. Efforts to relocate the shelter began and in October 1992, the shelter moved to North Crescent Ridge Rd. A new facility was built 2.5 times larger than the old one to accommodate anticipated growth. In 1992 the society also established a new cemetery for pets. (17)

Within two years of moving to the new location, the number of animals cared for doubled. Fortunately, the number of adoptions also doubled. In 1996, a small remodeling project was completed. But the numbers increased faster than anticipated, so less than ten years after it first opened, the shelter underwent a major upgrade and doubled its number of kennels. It also created a new training center. By the end of 2000, the number of animals adopted and cared for tripled from 1992. In 2000 the Society cared for approximately 3,500 animals. (18)

Through public relations efforts, "Humane Jane" and the Dubuque Regional Humane Society became well-known in the tri-state area. A staff of thirteen operated the shelter in 2010 which was open to the public seven days a week. Through regular community outreach programs, including regular spots on local radio and TV, the adoption program operated at record levels. Fund-raisers like "Strut Your Mutt" and "Dinner With The Stars" created positive awareness of the society's mission. The annual pet food drive and donations made by individuals and pet food manufacturers almost eliminated all pet food costs.

In 2008 the shelter was expanding its operations to include even more activities. Plans included the development of a comprehensive off-site adoption program in Platteville, Galena, Guttenberg and Davenport. A Behavior Program was started. In 2008 an adoption facility was established at KENNEDY MALL.

In 2011 the Society purchased the Carlisle Investments Building at 4242 Chavenelle Road. The completed renovation at a cost of approximately $2 million was scheduled for completion to allow a June 2013 opening. After moving into the building, the location at 175 N. Crescent Ridge was to be sold.

The relocation to the new facility actually occurred in October, 2013. A "ribbon-chewing" ceremony" was scheduled for October 24th. (19) The center was named Kinsey's Campus in memory of a disaster response and rescue golden retriever named Kinsey. The dog's owner was Nan Stuart, head of the charitable Hadley & Marion Stuart Foundation which donated $2 million for the new facility. (20)

Kinsey's Campus offered a key card access to a dog park for members, separate training and education areas, separate adoption area, resource center for children, and a larger veterinary area for care of the animals. (21)

In July 2014 the Humane Society and the City of Dubuque entered into a one-year, $133,000 contract preserving a relationship that had lasted nearly one hundred years. The two entities nearly split in 2004 after the Society requested a 248% payment increase for its care of stray animals. A last minute compromise allowed the city to gradually increase its payments over multiple years. A second-five year contract was signed in 2010 which set a baseline fee of $115,772 with annual increases based on the consumer price index. More than 1,000 animals in the city were handled by the humane society in 2014. (22)

The Dubuque Regional Humane Society was awarded two grants in June 2015 to buy a network server, computers and related equipment. One grant came from the Dubuque Racing Association for $5,000 and the other from McDonough Foundation for $7,500. (23)

In May, 2017 after years of criticism for its euthanasia policy, the Dubuque Regional Humane Society officially adopted a no-kill policy. Just three years ago, 1,200 animals were put down and just 61 percent were adopted. A change in the number of adoptions resulted in the new policy. In 2016 less than 200 animals were put down, and 92 percent of animals brought in were either adopted, returned to their owners, or transferred to another shelter. (24)

"Because our adoption rate is so high, we are able to take some of those resources and treat animals that might come in ill or injured, and we only reserve euthanasia for those animals that are too ill or injured to recover or have quality of life," Maria Benham, CEO of Society said, "or those that aren't sage enough to be reintroduced to the public." (25)