DAUGHTERS OF THE AMERICAN REVOLUTION

DAUGHTERS OF THE AMERICAN REVOLUTION. The Daughters of the American Revolution (DAR) is a lineage-based membership organization of women dedicated to promoting historic preservation, education, and patriotism. Potential members must be able to link their family history directly to a person involved in the American Revolution.

DAR chapters are involved in raising funds for local scholarships and educational awards, preserving historical properties and artifacts and promoting patriotism within their communities. The organization was founded on May 9, 1890 in Washington D.C. and by 1895 had a nationwide membership exceeding 7,000. Regents and chapters are found in every state and are under the direction of the National Board composed of national officers and state regents meeting monthly. The Continental Congress meets on February 22nd each year at which the chapter regents and delegates from each organized chapter are voters. (1) Some state chapters of DAR date from as early as October 11, 1890, and the National Society of DAR was incorporated by Congressional charter in 1896. In modern times an international organization DAR chapters are found Australia, Austria,the Bahamas, Bermuda, Canada, France, Germany, Italy, Japan, Mexico, Spain, and the United Kingdom. DAR's motto is "God, Home, and Country."

The Julien Dubuque chapter of DAR was organized in 1894 by Clara Aldrich COOLEY and twelve women who met at her home. Mrs. Cooley served as a delegate to the National Congress in 1895 and presented the local chapter with its charter during a meeting held in her home. (2) At that meeting, papers about the first battles and incidents of the American Revolution were read by Mrs. Shoup and Poole followed by an address by Mrs. Cooley. (3) Mrs. Cooley became the state regent of the organization and recommended June 14th as a day of commemorating the national flag in 1897. (4) 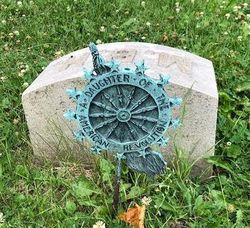 Grave marker of the association

Patriotic observances have been held by the local over the years. On April 29, 1898 members of the D.A.R., EARLY SETTLERS' ASSOCIATION, and many school children traveled by boat to the site of the burial of Julien DUBUQUE to honor Arbor Day. Eleven trees were planted and numbered corresponding to schools in the city and sponsoring organizations: Prescott (1), D.A.R. (2), Irving (3), Franklin (4), Early Settlers (5), Marshall (6), Fulton (7), Lincoln (8), High School (9), Audubon (10), Jackson (11). (5) In 1899 a portrait of Abraham Lincoln and in 1900 a portrait of Benjamin Franklin were presented to the high school. (6) Framed American flags were given to the public and parochial schools of Dubuque in June, 1909. (7) In 1914 the Julien Dubuque chapter met at the home of S. P. Rider on the 100th anniversary of the writing of the Star Spangled Banner and celebrated the history of the flag "in song and story." (8) In 1940 small American flags were presented to sixteen naturalized Iowa in Dubuque's district court. (9) The local chapter also sponsored the NATHANIEL GREEN CADETS. (10) A "Patriotic Garden Party" at Washington Park was held by the Julien Dubuque chapter in 1917 with a "fairly substantial fund" from the party going to a war relief fund. (11) In 1943 an unusual Defense Stamp Yule Party was held. Reports were made that 30 members had donated to the blood bank, 25 gifts for soldiers had been collected, and a collection of defense stamps toward the purchase of an additional war bond were taken. (12)

In 1906 Mrs. Bertha Lincoln HEUSTIS was chosen to sing the "Star Spangled Banner" to the one thousand delegates attending the D.A.R. National Convention in Washington, D.C. in 1906. (13) The City of Dubuque and the Julien Dubuque Chapter played hosts to the 23rd Annual Conference of the D.A.R. in 1923. Entertainment included a sight-seeing tour of the city as guests of the local chapter and the Dubuque Chamber of Commerce. Business of the organization and formal dinners were held in the HOTEL JULIEN DUBUQUE. (14)

Members of the chapter on May 4, 1928 attended the dedication of the Forest Reserve Park near Lamont. The national organization had planted 5,000 trees of which 93 were planted by the Dubuque chapter, one for each of its members. (15) The local chapter in 1930 also supported the national organization by contributing to the reconstruction of the Piney Ridge school's girls' dormitory. The school, located in Mississippi, was working with African Americans. Locally the Julien Dubuque chapter was one of six in the state compiling biographies of women active in the Revolutionary War. The local chapter also presented prizes to school children for essays on subjects of American history. (16) This activity in 2006 was focused on Benjamin Franklin. (17)

The Julien Dubuque chapter itself made history in 1945. In 1932 the national D.A.R. organization denied Marian Anderson, a famed African American soprano, the opportunity to perform in Constitution Hall in Washington, D.C. This caused Eleanor Roosevelt, wife of President Franklin Roosevelt, to resign from the organization. (18) In 1943 Ms. Anderson was allowed to sing in the hall due to pressure brought by Mrs. Roosevelt. Proceeds from the concert went to the United China Relief Fund. As part of the agreement between Mrs. Roosevelt and the national D.A.R., African Americans were admitted without discrimination to the concert. (19) Using the 1932 decision as precedent and after Franklin Roosevelt had died, the national organization in 1945 refused to allow Hazel Scott, a renowned pianist and wife of Rep. Adam Clayton Powell, the opportunity to sing in the hall. The Julien Dubuque chapter went on record protesting an action of the national organization. The Julien Dubuque chapter condemned the action of the national organization and was joined by President and Mrs. Harry Truman, other members of Congress, and many civic leaders. (20)

Educational interests of the Julien Dubuque chapter included financial aid to a school for underprivileged children in the name of Mrs. Carl Bartels who, in 1970, had just completed a two-year term as Iowa regent. (21) Annually the chapter awarded citizenship awards to six local students. Two each were awarded to members of the BOY SCOUTS, GIRL SCOUTS, and the DUBUQUE BOYS' CLUB. (22) The process by 2010 had been changed with awards being made locally and as far away as Starmont High School. Selected from area high schools, the students submitted a complete resumé, grade transcripts, recommendations, and an outline of extracurricular involvement. An essay was also written on a topic with which the student had no advance knowledge and without the use of any reference materials. Winners progressed to regional, state and national levels. (23)

Mayor Robert J. HORGAN was presented with the State Flag of Iowa in 1965 so that it could be flown at the DUBUQUE CITY HALL. (24)

One of the most widely recognized activities of the DAR in Dubuque has been the marking of historic sites. These include: 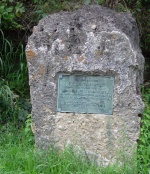 Marker placed along the MILITARY ROAD south of Dubuque 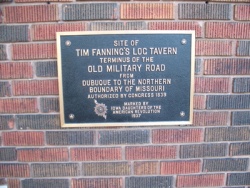 Sign posted at First and Main designating the start of the Military Road in Dubuque. 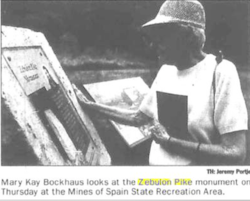 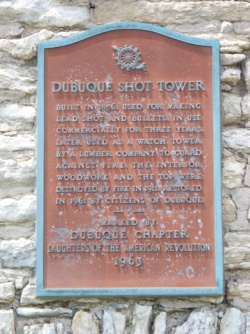