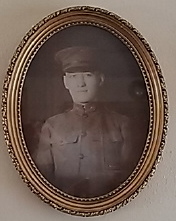 SPAUTZ, Matthew. (Dubuque, IA, Feb. 7, 1899--Chateau-Thierry, France, July 30, 1918). Recipient, Distinguished Service Cross. Matthew Spautz was an original member of Company A GOVERNOR'S GREYS when the unit left Dubuque to handle Mexican border problems. After being relieved in the south, he returned to Dubuque and was reassigned to Camp Dodge a few months after the start of WORLD WAR I. He arrived in France in November, 1917.

Sergeant Spautz served with Company A, 168th Infantry Regiment, 42d Division, (the Rainbow Division) A.E.F., near the Ourcq River, northeast of Chateau-Thierry, France. When the commander of the unit became ill, Spautz was assigned to lead his platoon into combat. During the advance of July 30, 1918, while in command of his platoon, Sergeant Spautz showed extraordinary heroism. Despite being wounded twice, he continued the advance until hit a third time.

Red Cross volunteers followed the troops at a distance. When they came upon Spautz, he refused to leave the field until the last wounded man of his platoon had been sent to the aid station. He died en route to the hospital. He was nineteen years old. 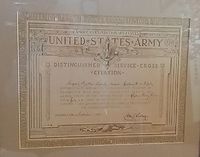 Sergeant Spautz was buried in France. Fifty-three days later General John J. Pershing, commander-in-chief of the Allied Forces in Europe, signed the papers awarding Spautz the Distinguished Service Cross. Two years after his death, Spautz's body was exhumed and returned to his hometown for burial. He was re-interred at MOUNT CALVARY CEMETERY. 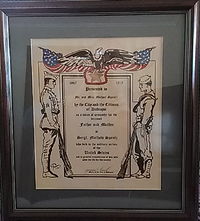 Governor's Greys at Camp Dodge in 1915. Sergeant Spautz is the sixth man standing from the left in the last row. Photo courtesy: Michael Spautz 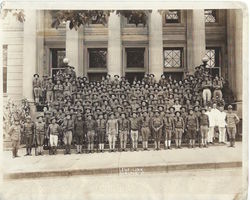 Dubuque Governor's Greys on the steps of the Carnegie-Stout Library. Matthew Spautz wearing white pants and having crossed arms stands under the right light pole. Circa 1917. Photo courtesy: Mike Spautz