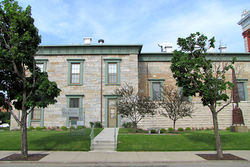 The Old Jail is one of America's rare examples of Egyptian style architecture.

OLD JAIL. The Old Jail was built between February 1857, and the spring of 1858 at a cost of $40,000, to replace a combination courthouse/jail built in 1839. The "Calaboose" as the first jail in the community was called was located at Seventh and Clay (Central). The building offered no heat or sanitary facilities. Public criticism led to prisoners being moved to the basement of the central market at 13th and Clay.

The architect, John Francis RAGUE, of the Old Jail designed the building to be constructed of gray limestone. Cast iron doors and window frames featured sun disk symbols and decorative columns, made of cast iron, flanked the entrance on 8th Street. The original plans called for the building to be a combination jail, hospital, and poor house.

The jail was constructed in two parts. A two-story square section was used as living quarters for the sheriff's family. The jail was attached to the south side. Three tiers of cells were located along the eastern wall with a catwalk used to reach the upper cells. The stonewalls were eighteen inches thick. A cell block in the curved-ceiling dungeon was used to hold Confederate prisoners during the CIVIL WAR and later found use with incorrigible prisoners who caused trouble in the upper cells. Six cells were added in 1874 to house juvenile and women prisoners. This area, however, was later used as a jail for those in solitary confinement.

Prisoners were put to work breaking rocks for eight hours each day. The crushed stone was used in road construction. Being chained together made the work especially hard and prisoners often rioted. In 1882 when they arrived at the rock quarry, the prisoners deliberately broke the handles on their hammers.

In 1893 a ten-foot wall was constructed to enclose a small yard on the west side of the jail. By 1946 this area was used as an exercise yard. The exterior appearance of the grounds was improved with sod and shrubbery.

Over the years the Old Jail developed a sorry reputation caused by the frequency with which prisoners escaped. Referendums for improvements were defeated twice. In November 1960, two days before voting on a $396,000 bond issue proposal, Dubuque County voters were given their first opportunity to see why officials believed the 104-year-old structure needed replacing. Sheriff's deputies provided tours with the prisoners confined to one area of the jail. Among the improvements desired was better security. In the current jail, the jailer had to open all cell doors when only one door needed to be opened. Another improvement would be segregation of habitual prisoners from juveniles or first time offenders. A third improvement would be a women's cell area which did not exist in the current jail. (1)

Failure of the bond issue led to conditions unchanged. Prisoners were transferred to a neighboring county jail in February after a municipal court judge ruled the facility "inadequate," (2) In March 1967 an inspector for the Federal Bureau of Prisons, following an inspection of the facility, said he would try to pressure Dubuque and Dubuque County to build a new jail (3) In August, 1967 the Dubuque Council of Churches renewed its attack on the poor facilities. (4) 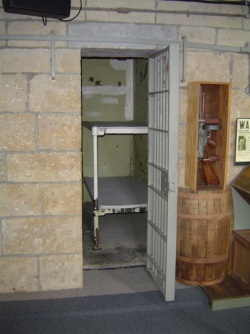 Cells over the years proved unable to prevent escapes.

On November 6, 1969 an open house was held at the jail to show the public the condition of the building. Even this did not influence voters, and the measure was defeated. The Dubuque Council of Churches and the State Board of Control criticized the jail without effect.

State officials issued a close order in 1970 but permitted limited use of the county jail as a "pretrial detention center" for periods of up to twenty-four hours on weekdays and forty-eight hours on weekends. This forced the county to transport a number of its prisoners to neighboring counties at a per-prisoner cost of more than $4.00 for each day of confinement. This cost Dubuque County more than $1,000 each month. 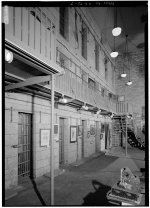 Cells in the jail's basement. Library of Congress

On Friday, January 8, 1971, Iowa Social Services Commissioner James N. Gillman ordered the facility closed. On Wednesday, January 13, 1971 by a unanimous decision, the Dubuque County Board of Supervisors agreed with the decision. Prisoners were taken to either the Dubuque City Jail--where they could be held for a maximum of twenty-four hours--or they were again transported at county expense to neighboring county jails.

One of only three surviving examples of EGYPTIAN REVIVAL ARCHITECTURE and the last to be built in the United States, the Old Jail was added to the NATIONAL REGISTER OF HISTORIC PLACES in 1972.

In 1975 the Old Jail was given a second life when the DUBUQUE ART ASSOCIATION leased and renovated the building as an art museum. For a time the building housed the county's juvenile probation offices and the art association. On August 8, 1983, the Dubuque County Supervisors agreed to lease the building to the Dubuque Art Association for twenty years. Later the building is used for lectures, demonstrations, instructional purposes and exhibitions as 'well as a site for poetry readings and dramatic presentations.

In September 1987, the National Park Service gave the jail "Historic Landmark" status. In 1988 renovations resulted in the building becoming an accredited museum of art. In October 1993 the William and Adelaide Glab Children's Gallery was opened.

On February 16, 1998 museum officials announced the purchase of the STATESMAN BANK building located on the corner of Seventh and Locust STREETS. It had most recently houses the PEOPLES NATURAL GAS administrative offices. It offered the Old Jail to the county as office space in for reimbursement to the museum for its renovation expenses. In April, 1998 the board of trustees of the Dubuque Museum of Art reconsidered its position regarding the use of Old Jail. Providing office space, the trustees decided, would result in the loss of a "unique cultural asset" for Dubuque. (5)

In 1999 the Dubuque Museum of Art moved to its new building across the street from WASHINGTON PARK. The Old Jail became part of the DUBUQUE COUNTY HISTORICAL SOCIETY and was used for selected displays. (Photo Courtesy: http://dubuque-tour.tripod.com)