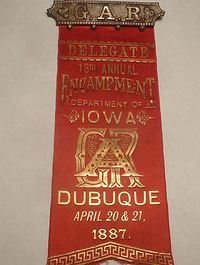 GRAND ARMY OF THE REPUBLIC (G.A.R). The GAR was a fraternal veterans' organization founded after the CIVIL WAR to provide all veterans of the Union Army with a form for social and political activities and as a focus for debate and reminiscence of their service. (1) The GAR was among the first organized interest groups in American politics. It was succeeded by the SONS OF UNION VETERANS OF THE CIVIL WAR.

The GAR was founded by Benjamin F. Stephenson, M.D., on April 6, 1866, in Decatur, Illinois. (2) Its organization, based on the traditions of Freemasonry and military tradition, divided into "Departments" at the state level and "Posts" at the community level. Military-style uniforms were worn by its members. There were posts in every state in the United States, and several posts overseas. 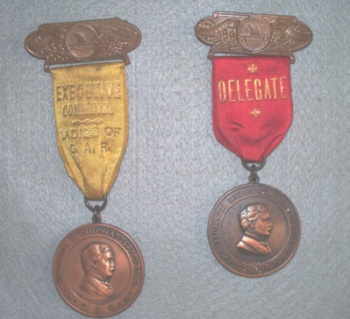 The organization enjoyed considerable political power nationwide. Between 1868 and 1908, no Republican was nominated to the presidency without a GAR endorsement. (3) In 1868, General Order #11 of the GAR called for May 30 to be designated as a day of memorial for Union veterans. Originally the event was called "Decoration Day." It later became Memorial Day. The GAR was active in pension legislation, establishing retirement homes for soldiers, and many other areas which concerned Union veterans. The influence of the GAR led to the establishment of the Old Soldiers' Homes of the late 19th century and the current United States Department of Veterans Affairs.

The following information was taken from The Detroit Tribunes Veteran Soldiers and Sailors Hand-Book Copyright 1889. 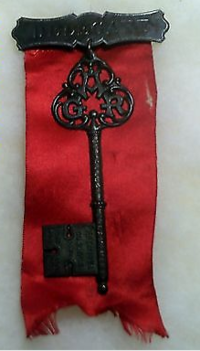 1907 Encampment pin in the Key City

In 1882 the Hyde Clark Post, No. 78 Grand Army of the Republic, was organized. The group was named for William Hyde CLARK who entered the Union Army on April 22, 1861 at Dubuque and eventually served on the staff of Brigadier General Francis J. HERRON through campaigns in Missouri and Arkansas. Clark was breveted Brigadier General when Herron was made Major General. Clark remained in the military through the war before returning to Dubuque. (4)

There were thirty-two charter members in the post. Within several years the number had grown to several hundred and then peaked at 486. Disagreements in the group led several hundred to withdraw and organize a second post called, "Lookout. In 1925 when their numbers had decreased to four members, the post was disbanded. In 1926 the Hyde-Clark post had a membership of twenty-four. (5)

There was some controversy over the fact that the membership badge of the GAR closely resembled the Army's version of the MEDAL OF HONOR, causing confusion and animosity among veterans. In 1896 the issue was settled with a re-design of the Medal of Honor.

With membership strictly limited to "veterans of the late unpleasantness," the GAR encouraged the formation of Allied Orders to aid them in various projects. Male organizations competed for the backing of the GAR, until the GAR finally endorsed the SONS OF UNION VETERANS OF THE CIVIL WAR as its heir. The GAR also created several auxiliary organizations including the National Woman's Relief Corps, Ladies of the Grand Army of the Republic, and Daughters of Union Veterans of the Civil War, 1861-1865, many of which are still active. (6)

Although a male organization, the GAR admitted its sole woman member in 1897. Sarah Emma Edmonds served in the 2nd Michigan Infantry as a disguised man named Franklin Thompson from May 1861 until April 1863. In 1882, she collected affidavits from former comrades in an effort to petition for a veteran's pension which she received in July 1884. Edmonds was only a member for a brief period as she died September 5, 1898, however she was given a funeral with military honors when she was reburied in Houston in 1901. (7)

The GAR reached its largest enrollment in 1890, with 490,000 members. It held an annual "National Encampment" every year from 1866 to 1949. In 1938 Frank L. Quade was elected the national organization's senior vice-commander. (8) At that final encampment in Indianapolis, Indiana, the few surviving members voted to retain the existing officers in place until the organization's dissolution; Theodore Penland of Oregon, the GAR's Commander at the time, was therefore its last. In 1956, after the death of the last member, Albert Woolson, the GAR was formally dissolved; two years before, as the organization's last surviving member, Woolson deeded its property over to the Sons of Union Veterans of the Civil War.

The GAR's records went to the Library of Congress, and its badges, flags, and official seal went to the Smithsonian Institution. Until its dissolution, including its peak membership years, the GAR was headquartered in one half of the 1893 Chicago Main Library on Michigan Avenue between Washington and Randolph St. The current Chicago Cultural Center, which occupies all of the former library space, has preserved the entire building with special attention to the original GAR meeting hall. On a marble frieze are carved ivory inscriptions representing all the main Civil War battles. The building is free to the public. (9) 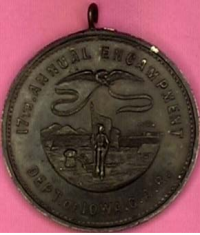 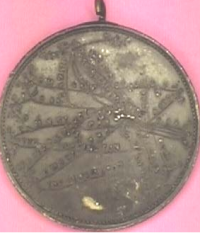 Detailed map of Midwestern railroad lines centering on Dubuque which is labeled with a key. 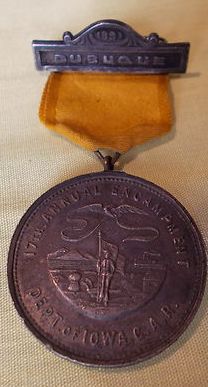 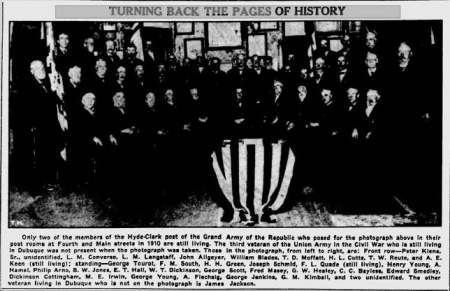 1. Grand Army of the Republic Museum and Library. Online--http://garmuslib.org/

2. "A Brief History of the Grand Army of the Republic." Online--http://garmuslib.org/GARhistory.htm

6. The Grand Army of the Republic and Kindred Societies, p. 1