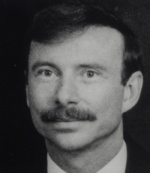 William Woodward
WOODWARD, William. (Dubuque, IA, Jan. 14, 1939--Dubuque, IA, Aug. 12, 1995). Woodward, a son of Frederick Robert WOODWARD, Sr., graduated from Culver Military Academy; received his undergraduate degree in economics from the University of Iowa and graduated from the University of Iowa Law School. He joined the TELEGRAPH HERALD in the 1960s and rose to become its chairman.

Woodward served as a member of the board at the UNIVERSITY OF DUBUQUE, Dubuque Dock Board and the DUBUQUE COUNTY HISTORICAL SOCIETY and was the historical society president from 1991-1994. In 1978 he received the "Outstanding Service Award" for negotiating as chairperson of the Dubuque Dock Board a complex agreement involving waterfront land. The agreement led to expanded facilities for two industries and paved the way for further development of the TOURISM industry in the ICE HARBOR. Woodward was also cited for obtaining new long-term leases from tenants on city-owned property that resulted in additional income for the city. He was appointed to the Arena Center Committee to oversee the planning of the FIVE FLAGS CIVIC CENTER and served as president of the Iowa Daily Press Association from 1976-1977.

In December 1988, the Eastern Iowa National Society for Fund Raising Executives awarded Woodward its Outstanding Philanthropist Award. Woodard was president of the Woodward Foundation that, since its organization in 1956, distributed more than $1.1 million to cultural, educational, historical, and youth related organizations. Recipients have included the University of Dubuque with its William P. Woodward Visiting Artist-In-Residence Endowment and the NATIONAL MISSISSIPPI RIVER MUSEUM AND AQUARIUM.