Difference between revisions of "WITNESS (THE)" 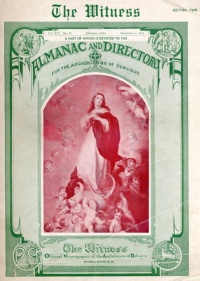 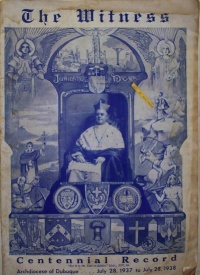 Centennial Record. Photo courtesy: Bob Reding
WITNESS (THE). Northeast Iowa's largest weekly newspaper, The Witness was founded by Archbishop James J. KEANE in 1921 as the official archdiocesan newspaper. It carries all official diocesan business and the national and international news of interest to Catholics. Columns are written on many subjects and articles are featured about events in the thirty northeast Iowa counties. The non-profit newspaper has been published with an editorial staff of two people and a total staff of ten.(1)

Father Thomas RALPH edited this Catholic newspaper for members of the ARCHDIOCESE OF DUBUQUE beginning in 1937. The potential market of the paper has been estimated at seventy-two thousand Catholic families living in thirty counties. Until 2002 when Sister Carol Hoverman, a Dubuque Franciscan, began serving as editor and director of communications, all the editors were priests. In 2012 to celebrate the 175th anniversary of the archdiocese, a special commemorative edition will be sent to more than 66,000 Catholic households in the archdiocese. (2)

In 1973 the Witness began receiving its news by wire instead of the U.S. Postal Service. The Witness joined the teletype network of the National Catholic (NC) News Service which linked Roman Catholic newspapers around the United States. The Washington, D.C. office was the principal source of news and features for the national Catholic press. The teletype system, leased from the Dow-Jones wire circuit, allowed NC to dispatch stories to subscribers as they happened rather than using daily air mail-special delivery packets.

In 1975 the publication's offices were moved to 1229 Mount Loretta. Before that they were located in the Telegraph Herald building at 801 Bluff and the paper was printed there.