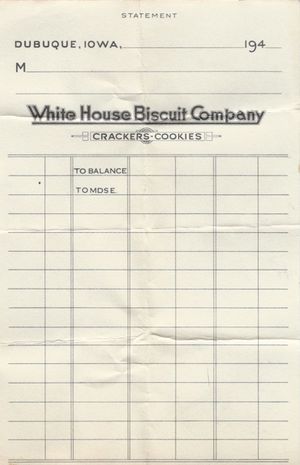 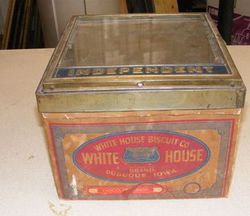 WHITE HOUSE BISCUIT COMPANY. Organized in 1916 to take over the DUBUQUE BISCUIT COMPANY, the White House Company by 1929 had increased business more than 500%. The plant had been enlarged four times and the number of employees had grown to eighty-five. Most of the company's business was carried out in Iowa, Illinois, Wisconsin and Minnesota. (1)

One of the major products of the firm was crackers. After the dough was mixed, it was allowed to ferment overnight. After a second mixing during which salt, soda and malt extract were added, the dough set again for four hours in a room kept at 80 degrees. The dough was then molded into fifty pound lots and routed through a rolling machine. At a uniform thickness of just a fraction of an inch, the dough proceeded through a cutting machine operating at 2,160 crackers per minute. An estimated 12,000 pounds of crackers were made daily with 110 crackers to the pound. Cooked in an open coke oven at a temperature of 560 degrees for "4 and 4/5th minutes the product was finished and ready for packaging. Cookies were also produced. (2) 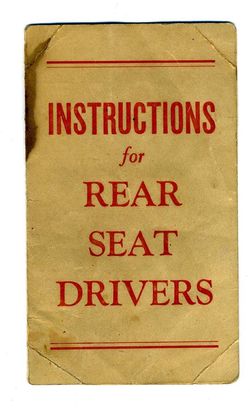 White House also became identified with "safe" candy in the 1930s. In 1920 a group of businessmen including Charles Parker, a salesman from Chicago, and J. L. Meyer, president of the White House Biscuit Company heard the terrible cries of a boy who had fallen while holding a candy sucker. The wooden holder had pierced the roof and his mouth and killed him and killed him. It took years, but the incident eventually sparked a meeting with Clifford Dennis, a member of DENNIS BROS. COMPANY of Dubuque at which the idea of the wooden holder being replaced by a loop of soft, flexible material which gave way at the slightest pressure was introduced. Patents were obtained and the Reed Candy Company of Chicago was given an exclusive royalty-free franchise for two years to begin manufacture. (4)

In 1933 the Parker-Meyer-Dennis company began the use of a distinct manufacturing unit in Dubuque. The machine was eventually placed into operation at the White House Biscuit Company plant. In 1936 efforts to improve the efficiency of the machinery were still under way. (5)

The machinery made it unnecessary for the candy to ever come into contact with human hands. Cooked in large kettles, the candy was placed into the machine in large hunks, cut into pieces of uniform size and pressed into molds under three hundred pounds of pressure with the safety holder automatically tightly embedded. (6)

In 1945 the White House bakery building at 9th and Jackson was purchased by the newly incorporated BAXTER MANUFACTURING COMPANY from the Independent Baking Company for $15,000. Costs of remodeling the building into a modern factory were estimated at $50,000. (7) The new company would employ forty women and twenty men in the factory and ten men and women in the office. The company wold manufacture soap flakes. (8)