Difference between revisions of "SMEDLEY, Edwin"

SMEDLEY, Edwin. (Manchester, England, Nov. 22, 1840-- ). Smedley was educated in England and joined his parents when they emigrated to the United States. In 1856 he was apprenticed to the firm of Barrett & Chapman of Wooster, Ohio, a manufacturer of engines and heavy equipment. At the end of his four year apprenticeship, he served in the CIVIL WAR.

He returned to Wooster and resumed work as a machinist. At night he attended classes and took courses in bookkeeping, mathematics, and machine drawing. He moved to Dubuque in 1872 and went to work for the Chicago, Milwaukee & St. Paul Railroad as a master mechanic. He held the same position until 1882. In 1874 he received a patent for a locomotive bell ringer which became standard equipment in the industry.

In 1882 the National Iron and Brass Works was organized in Dubuque by Smedley and Charles Meyer. In 1890 the company was renamed the Smedley Manufacturing Company. The firm manufactured the locomotive bell ringer and all kinds of hydraulic machinery and apparatus including the Smedley steam pumping machinery, boilers, drill presses, and steam engines. 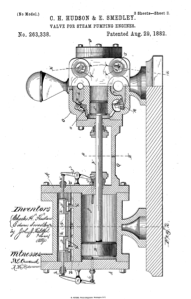 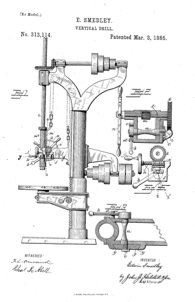