Montgomery Ward was founded by Aaron Montgomery Ward in 1872. Ward had conceived of the idea of a dry goods mail-order business in Chicago, Illinois, after several years of working as a traveling salesman among rural customers. He observed that rural customers often wanted "city" goods but were often victimized by monopolists who offered no guarantee of quality. Ward also believed that by eliminating intermediaries, he could cut costs and make a wide variety of goods available to rural customers, who could purchase goods by mail and pick them up at the nearest train station. 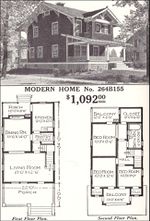 The Montgomery Ward catalog became an American institution offering everything from clothing to house kits. Montgomery Ward's kit home business. Like a number of similar companies, they began selling materials, lumber, hardware, and plans before World War I. By 1922, they began selling under the Wardway name and were closely affiliated with the Gordon Van Tine Company, which manufactured their homes for them. Many of their homes are identical to those offered by Gordon Van Tine. (1)

The Wardway "ready-cut" kits were sold from 1922 until 1931. The Depression years took their toll. Much of the profit in the kit home business came from the mortgage financing that accompanied the sale, not the materials or the house itself. According to the research conducted by Dale Wolicki, an architectural historian and expert on Gordon Van Tine, New Deal mortgage programs through the Federal Housing Administration allowed home owners to refinance existing mortgages at a lower rate. By paying off their Montgomery Ward contracts, homeowners effectively cut the profits that allowed the company to pursue the business. Though other manufacturers were able to survive, Montgomery Ward terminated their kit home business as a result. (2)

Notice the last line on the order form.

On December 28, 2000, the company, after lower-than-expected sales during the Christmas season, announced it was going out of business and would close its remaining 250 retail outlets and lay off its 37,000 employees. All the stores closed within weeks of the announcement. The subsequent liquidation was at the time the largest retail bankruptcy liquidation in U.S. history. All of Montgomery Ward was liquidated by the end of May 2001.

The 1964 Dubuque City Directory listed a farm store at 500 Main.