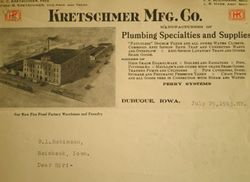 Photo courtesy: Jim Massey
In February of 1907 brothers, Herbert and Frederick N. KRETSCHMER opened the Kretschmer Manufacturing Company with a capital stock of $40,000. In 1911 the company advertised that it manufactured plumbing and heating supplies and had a specialty in bath trap and double flush water closets. Forty workmen were employed.

The company soon joined Andrew Morrison in forming Morrison & Kretschmer Manufacturing Company. The 1909 Dubuque City Directory located this business at the corner of 9th and Washington.

When Morrison left, the business again became Kretschmer Manufacturing Company. Later when the brothers bought out Tredway and Sons (established in 1858), the name was changed to Kretschmer-Tredway Company.

In 1911 the company advertised that it manufactured plumbing and heating supplies and had a specialty in bath trap and double flush water closets. Forty workmen were employed. Until 1936, Frederick Kretschmer guided the company as its president.

From 1936 to 1944, Mrs. L. A. Kretschmer served as President, being one of the few ladies to hold such a position during that era.

In 1998, Kretschmer-Tredway was purchased and renamed FIRST SUPPLY DUBUQUE,the first Iowa facility for the corporation. The successful facility continued to grow and in March 2007 relocated to its current location on Chavenelle Drive. 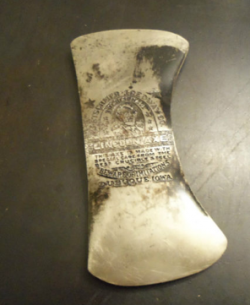 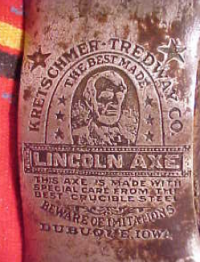 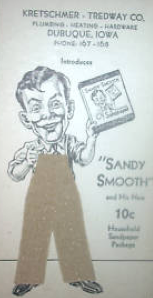 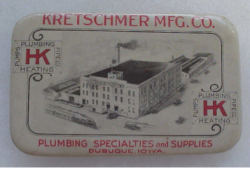