Difference between revisions of "HOERNER, Streat" 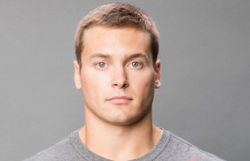 HOERNER, Streat. (Dubuque, IA-- ). Hoerner is a graduate of DUBUQUE SENIOR HIGH SCHOOL where he was an all-state linebacker and the University of Iowa where he placed on the Dean's list and earned in 2017 an industrial engineering degree. The same year, he qualified to compete in the Reebok CrossFit Games in Madison, Wisconsin with thirty nine other athletes. (1) He placed second at the North Central Regional qualifying competition in Nashville in late May, 2017. For that event, 300,000 athletes worldwide had competed. Only the top five performers advanced to Madison. (2)

Making the Madison competition even more difficult, contest organizers told the contestants of only 5 of the typically 15 competitions held in such events. (3) On August 3, 2017 on the first day of his first ever Reebok Crossfit Games, he placed 11th in the Run Swim Run, an endurance test in which athletes ran a road course for 3 miles with a 500-meter swimming course in between, morning event; 14th in the Cyclocross event; and 20th in the Amanda .45 to earn 150 points. (3) He was 110 points behind Day 1 leader and defending champion Mathew Fraser with six events remaining. (4) He finished in 14th place. (5)

On the second crossfit athletes competed in the Sprint O-Course (an obstacle course), the 1-Rep-Max Snatch and the Triple-G Chipper (a five-part, full-body lift workout). Events on August 5, 2017 included the Strongman’s Fear and the Muscle-Up Clean Ladder. The competition concluded on August 7, 2017 with the Madison Triplet. (6)

Illness affected the outcome of the competition. Sick for the last three events, Hoerner placed 15th in the Games. (7)

On January 12-14, 2017 Hoerner competed in Wodapalooza, a crossfit competition in Miami, Florida and placed first among 39 competitors. (8)

In May, 2018 Hoerner ranked No. 6 in the world after being No. 119 the previous year. In the last three years, he climbed from No. 6 in the United States rankings. He earned the top qualifying score of more than 14,000 male athletes from eleven states-North Dakota, South Dakota, Illinois, Kansas, Oklahoma, Nebraska, Minnesota, Arkansas, Missouri, Iowa and Wisconsin in the North Central Region. The top twenty qualifiers then joined twenty others from Michigan, Ohio, Tennessee, Kentucky and Indiana in the Central Regional. The top five then advanced to CrossFit Games--the "Olympics" of the sport. (9)

In September, 2018 Hoerner scored 899 points to finish in second place in the pro/elite division at the 2018 Kill Cliff Granite Games in St. Cloud, Minnesota. On September 15 Hoerner left for Dubai to fulfill a one-year contract with CrossFit Alioth to train and serve as coach. (10)