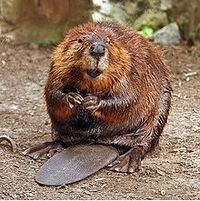 BEAVERS. Beavers are known for their natural trait of building dams on rivers and streams, and building their homes (known as "lodges") in the resulting pond. Beavers also build canals to float building materials that are difficult to haul over land. They use powerful front teeth to cut trees and other plants that they use both for building and for food. In the absence of existing ponds, beavers must construct dams before building their lodges. First they place vertical poles, then fill between the poles with a crisscross of horizontally placed branches. They fill in the gaps between the branches with a combination of weeds and mud until the dam impounds sufficient water to surround the lodge.

Beavers are known for their alarm signal: when startled or frightened, a swimming beaver will rapidly dive while forcefully slapping the water with its broad tail, audible over great distances above and below water. This serves as a warning to beavers in the area. Once a beaver has sounded the alarm, nearby beavers will dive and may not reemerge for some time. Beavers are slow on land, but are good swimmers, and can stay under water for as long as 15 minutes.

The population of beavers in the United States was greatly depleted by the FUR TRADE.

In 1937 conservationists were "behind a new industry for Dubuque." Citing their opinion that beavers "were not native to this locality," conservationists constructed a dam on CATFISH CREEK near the monastery prior to a pair of beavers being brought to the district in the spring of 1938. In addition, the creek south of Dubuque was planted with willows. The plants were intended as a food for beavers, to prevent erosion, and keep the creek narrow and deep enough for fish. Conservationists supported their efforts by saying that beavers did more than any other animal for the conservation of streams by damming them to create places to live. (1)